Gail Benoit to be sentenced for selling kittens without a health certificate January 27th, 2017 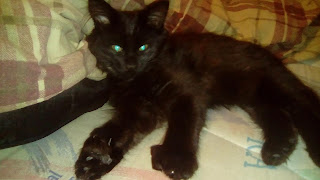 In November 2016 Gail Benoit was convicted under the Nova Scotia's Animal Protection Act for failing to provide a health certificate for 2 kittens she sold as well as for refusing to give information to a peace officer to inspector - for 2 kittens that she sold as "himalayan" kittens but that turned out to be normal mixed breed kittens.

Today - January 12, 2017 she was supposed to be sentenced but for some reason the judge decided he needed more time so the sentencing was moved until January 27th 2017.

It was dispappointing to hear that all the crown is looking for is "a 12-month suspended sentence and a five-year ban on owning animals but would allow her to keep the three dogs she currently has." which is being reported on facebook from a person someone who was in the court room.  Advocates were hoping that she'd get a lifetime ban on possessing animals after her decades long negative interactions with animals - but one guesses that it's going to take more dead animals for this to happen.

It was also said that in the courtroom this blog was talked about - and taken as fact that the public have been harassing her because it exists.

This blog - Gailbenoit.ca - has existed for eight years - one would think that if the subject of this blog - Gail Benoit - who has known about the blog since the beginning - would have done something about this blog - a lot sooner than now - maybe eight years ago maybe - if they were so bothered by it.

This blog only has factual material on it - reposting of news articles that exist elesewhere - and hardly can be considered harassing.  If that were the case - then every journalist who has ever written a news article about her would also be considered to be harassing her as well.